How Hazel Got Her Name 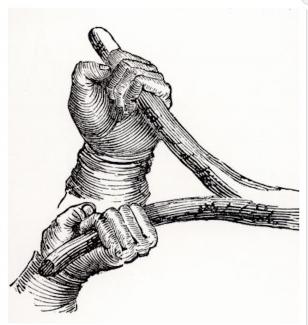 I had known about the tool for months before I learned why it was named Hazel. As it turns out, there is a meanigful story behind the name. Hazel is a reference to the divining rod, or dowsing rod: a folk tool used for discovering subsurface resources. I set out to learn more.

Dating back thousands of years to multiple cultures, water dowsing is a process in which a person – often called a ‘dowser’ or ‘water-witch’ – uses a hand-held tool to detect groundwater on a given tract of land. By the 1500s, Europe had established dowsing as a legitimate practice for groundwater sourcing. Dowsers used local materials, often the witchazel branch (there’s the inspiration, folks!), to craft their divining rods. When used properly by the right person, these two-pronged sticks of hazel would guide farmers and developers to unseen water supplies. At this point, I have to stop and admire the apparent teamwork that was developing between nature and society. Humans began using something of the earth to communicate with the earth in a way that could, with careful procedure, have a positive impact on human life and the natural world. It was like Mother Nature wanted her groundwater to be found by the water witches.

Years passed and dowsing evolved. One thing that has changed is the material used for divining rods; modern models are comprised of two small L-shaped wires. Another change emerged with new scientific research. As hydrologic, geologic, geophysical knowledge increased, so did skepticism regarding the practice of water dowsing as a legitimate method for water sourcing. Terms like ‘folklore’, ‘pseudoscience’, and ‘witchcraft’ have become attached to the practice of water divination because the process does not meet current scientific standards. Despite the skepticism, there is still a thriving network of water witches around the world. Modern day water dowsers see power and beauty behind the mysteries of divination. William C. Barham, an experienced dowser from North Carolina, remarks: "I don't know what makes it work, but if you can find somebody who does, I wish you'd tell me. All I know is that I can't hold that sprout still when it gets over the water."

History is often thought of as background or preface. In this instance, I think it serves its purpose by shaping the philosophical architecture of the Arid Lands Institute, as important to the team as the scientific data that supports the digital tool. The history of dowsing or divining emphasizes our direct connection to landscape, our bodies, intuition, and observations informing intimate relationships to space, and how we design it.