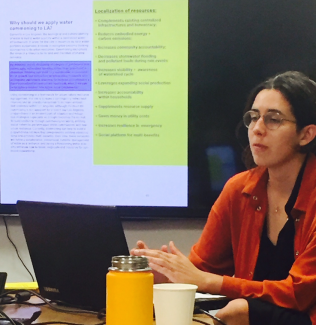 K: Hi Stephnie, thanks for taking the time to talk a bit. Where are you from?

S: I'm from San Jose, Costa Rica.  I grew up there, and came to the states to study architecture at Carnegie Mellon.

K: What are you working on at ALI?

K: What was your favorite course or project with ALI?

S: I was really struck when learning about acequia communities while working on Rio Embudo's watershed analysis in New Mexico. I was fascinated by the social dimension of the acequia which later influenced my thesis on what is an urban water common model and how would that function. I'm excited to have the opportunity to go visit some of the acequia communities along Rio Embudo in New Mexico. We are setting up opportunities to talk to mayordomos to get a first-hand account on some of the issues, challenges and opportunities in a centuries-long water commons tradition.

S: Favorite memory is meeting Peter and Hadley for my first day of "class" which instead of being in studio we met at Urth Caffe, we circled around  the under-construction LACI [LA Cleantech Incubator] and then I was taken to the first LA River Corp [now River LA] public presentation on the LA River. I thought it was such an unusual first day of class but it told me a lot about how different this method of working would be which would be more about talking with people rather than sitting at your desk.

K: That different ‘method of working’ … Could you talk a bit about how that worked? What were the benefits/disadvantages of being part of a curriculum centered more around interaction than what you were used to?

S: At ALI, there definitely is continuous and iterative practice to talk to different experts within Los Angeles about thesis research development -- including architects, urban planners, non-profits, academics, community organizers, artists, policy-makers and home-owners. The design evolves from a very real conversation happening not only in architectural discourse but also climate change, urban planning and policy fields. At first its a bit intimidating to present work you don't feel is there yet but the practice is essential for testing and selling your ideas in the simplest of terms.

K: What does water mean to you?

S: Water is essential to life as we know it. I was always very fascinated with ecology and the role of water as it moves and informs the environment around us. Being from the tropics, water was part of my everyday, where rain would start pouring around 4pm like clockwork. The rain would pound on the tin roofs and flow into the streets, cracks in the sidewalk and into the rivers carving away a mountainous terrain. Moving to Los Angeles and the West, I saw how the scarcity of water was still very important in defining micro-climates where rain instead of a routine-like background is an event.

K: So do you think water is a design issue?

S: Water is a complex issue involving politics, social agendas, survival instinct, economy and architecture. Design can help to bridge all these different "silos" to communicate to each other for a more integrated approach.

K: How do you define water?

S: Because of its fluidity, it runs everywhere but also its harder to control and manage. But there is an inherent human desire to control and understand water for our livelihood. Water in a way is much more that its physical presence, its about power, its about survival but its also about society and ecology.

K: Top three video/podcast/website about your field of study?