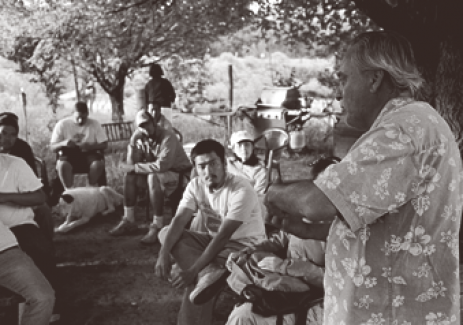 Estevan Arellano, champion of New Mexico's acequia way of life and water-mentor to ALI students and faculty since 2002, died suddenly on October 29th, 2014.  He was 67.

Estevan shaped us, and shaped the Arid Lands Institute.  He cared only about things worth caring about: integrity of water, land, people, culture, and language.  He looked at his family’s land and the austere high-desert landscape surrounding it and where many saw scarcity, he saw abundance: abundance of wisdom, tradition, comraderie, resourcefulness, nutrition, hospitality, and possibility.

As he walked with us, along ditches, up arroyos, through fields, and at the end of the day into the kitchen and to the sensuous table, heaped with Elena's magnificent cooking, he instructed us about both the natural and the human systems at work in the acequia landscape.  He saw a teaching landscape, peopled by a teaching society, and gave it voice. He was its ideal.  Farmer, builder, poet, journalist, sculptor, activist, historian, father, husband, leader, teacher.

Estevan loved our students and marveled at their backgrounds.  When we brought him one summer's cohort and he counted seventeen mother tongues among them, a group that included students of Kazakstani, Syrian, Armenian, Jordanian, Iranian, Egyptian, Guatemalan, Ecuadoran, Mexican, Philipino, Vietnamese, and Taiwanese origin, it was like we had spread a banquet before him.  His eyes danced with hunger, and he began to teach.

He taught the Iberian, Mediterranean, North African, Arabic, Persian, MesoAmerican and Native American roots of acequia language, customs, foods, and technologies. Each piece of the landscape system found a corollary in words, practices and customs familiar to our kaleidoscopic students in their homelands. The memory of grandparents working carefully in distant agrarian landscapes seemed to take on a new validity and logic to our traveling band of urban transplants.

Estevan shared with us words and concepts sacred to his friends, generation, and community—words like querencia and resolana.  Querencia, Estevan wrote, was the love of place:

'The Diccionario de la Lengua Española de Real Academia Española defines querencia as “inclinación o tendencia del hombre y de ciertos animals a volver al sitio en que se han criado o tienen costumber de acudir,” the inclination or tendency of man and certain animals to return to the site where they were raised or have a tendency of returning to. For our purpose it also means “affection,” “longing,” or “favorite place.” But it also implies a sense of responsibility to that place, a particular ethic toward the land. It is the place that people say “conoce como sus manos,” he knows like his hands.' [1]

A new word for some of us, but not an unfamiliar impulse.  Resolana, likewise: the sun-warmed place of dialog, chatter, exchange; an informal side-by-side way of talking and debating, in a field or on a plaza; found space animated, claimed, and made public by discourse.

Estevan allowed us to check these words out, take them on, maybe even take them home, and yes, bastardize them along the way.  When a friend of his suggested that it was a trivialization of such politically potent concepts to hear them come from the mouth of a gringa, one from LA no less, Estevan countered:  "All language is a bastardization.  Why wouldn't you want someone from Los Angeles to be thinking about querencia and resolana?  They need it there maybe more than we do here."  He was not precious about the stewardship of ideas, or language; he saw us less as invasive species threatening native ideals; instead he seemed more interested in propagation, grafting, cultivating hybrids.

Long after acequieros had begun to shape their piece of the arid west with the introduction of Old World traditions and technologies, Thomas Jefferson voiced a dream for this patched and cobbled nation, a vision of a democracy peopled by land-competent, idea-conversant citizens.  He called his ideal citizen the educated yeoman—people who were both physically and technically capable of managing land, water, and animals; and intellectually robust, familiar with the science, history, and principles of managing natural and human systems. Only the educated yeoman, the fully capable citizen-steward, was worthy of being entrusted with the American landscape, and the American destiny. Only a land-based citizenry with access to quality education could participate in and sustain true democracy.

"He didn't invent it," Estevan said one night over dinner, referring to Jefferson and his educated yeoman.  I knew what Estevan was implying. The acequia landscape produced a democratic society of self-governing water stewards, capable, cognizant, and collaborative, long before there was a Monticello, an educated yeoman, or a Jeffersonian grid designed to produce them.  "No," I said, "maybe not.  But he'd recognize one if he met one."  "Yes," said Estevan, twinkling.  I did not want to embarrass him; we had skated too near the brink of flattery already; he knew I saw him as the epitome of the Jeffersonian ideal. "Cheers," said I.  We clinked our shot glasses and enjoyed some tequila.

I think of Estevan's house on the Acequia Junta y Cienega: 40,000 adobe bricks, each one handled six times by his hands before being placed; the smooth troweled ox-blood finish of the floors he laid; the kiva-like shape of the bench he built into the wall by the fireplace; the smell of piñon smoke; the light pouring in from the skylight, illuminating his desk in the interior court, his family and table not far away.

I think of his fields, his water, and of him teaching under the apricot tree (from the Arabic, albaricoque), students encircled. I think of our differences, and his tolerance, openness, even cantankerous delight in them.

I think of his name and its roots.  Arellano.  It may refer to a town in Basque country; or possibly a Roman reference to the estate of Aurelius. In the end, I prefer Estevan's own translation:  are-, dry; -llano, plains. Arid Lands.