Celebrando las Acequias always brings together an amazing crew for music, food, poetry, scholarship, politics, and field work.  This year is no exception. Some of the scholars joining us this year include: 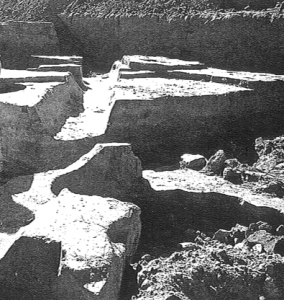 William E. Doolittle, PhD is the Erich W. Zimmermann Regents’ Professor of Geography in the Department of Geography and the Environment at University of Texas, Austin.  Doolittle is a leading scholar of the history of cultivated landscapes in North America, with a focus on agricultural technologies as agent of landscape transformation in arid lands. Doolittle's keynote presentation at Celebrando V will explore the roots of  landscape technologies, including the acequias of New Mexico, by distinguishing threads of invention, diffusion, and  everyday farming practices.  His observations on the nature of indigeneity draw on more than 35 years of inspecting irrigation canals and landscapes in the arid lands of the American Southwest, Mexico, Spain, Portugal, Morocco, Kenya and Tanzania. Doolittle received the Carl O. Sauer Distinguished Scholarship Award from the Conference of Latin Americanist Geographers, the Distinguished Scholarship Award from the Association of American Geographers, and the Robert McC. Netting Award for Distinguished Interdisciplinary Research between geography and anthropology from the Cultural Ecology Specialty Group of the AAG.  He is a Fellow of the American Association for the Advancement of Science. 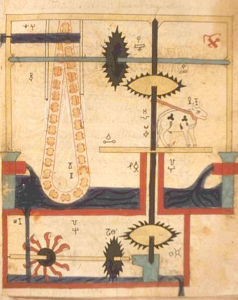 James L. Wescoat, Jr. is Aga Khan Professor of Architecture at the Massachusetts Institute of Technology.  Wescoat's research concentrates on water systems in South Asia and the US from the site to river basin scales.  It includes studies of Mughal garden waterworks in Agra, Delhi, and Lahore.  At the larger scale, Wescoat has contributed to water policy studies in the Colorado, Indus, Ganges, and Great Lakes basins.   His publications include edited volumes on Mughal Gardens; Water for Life: Water Management and Environmental Policy with geographer Gilbert F. White; and an edited book on Political Economies of Landscape Change: Places of Integrative Power. Wescoat's presentation at Celebrando V, "The Duties of Water Reconsidered," explores competing frameworks for water's highest and best use—ranging  from Indo-Islamic to British colonial and 20th C. American conceptions of the "duties of water"— and seeks to expand and integrate 21st-century water ethics. Wescoat earned a Bachelor of Landscape Architecture degree from Louisiana State University and practiced in the U.S. and Middle East before returning to graduate study in geography at the University of Chicago with an emphasis on water resources.   He taught water resources courses at the University of Colorado at Boulder and University of Illinois at Urbana-Champaign before joining MIT. 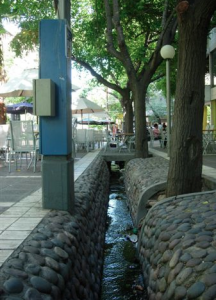 Jorge Ricardo Ponte, PhD. interweaves urbanism and the history of the Latin American city; urban sociology; and the restoration of architectural monuments. He is the author of The Fragility of Memory: Representations, Press and Power in a Latin American City during Modern Times; Mendoza 1885-1910, as well as such case studies of micro-history as El Carmen: A Hospital for Philanthropy and From the Indian Chiefs of Water to a Canalized City: Five Centuries of History of Water Canals and Windmills. At Celebrando V, Dr. Ponte will present "Mendoza's acequias and the caciques of water." The talk places a wide range of historical irrigation settlements in the context of water traditions throughout the Americas.  Dr. Ponte's research explores the historical processes of encounter and enculturation between aboriginal and imperial irrigation processes:  the appropriation, rejection, breakdown, alterations, and adaptations of water systems as shapers of North American territories. Dr. Ponte received his graduate education in architecture at the University of Mendoza in Argentina and his Ph.D. at the École des Hautes Études en Sciences Sociales de Paris (EHESS). A 2010 Guggenheim Fellow, he is currently a full-time researcher at CONICET (National Council for Scientific and Technical Research of Argentina). 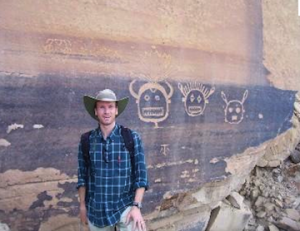 Severin Fowles, PhD is an archaeological anthropologist from Barnard College with a long-term research commitment to the landscape, material culture, and local communities of northern New Mexico.  Since 2007, he has had a particular focus on the rift valley of the Rio Grande Gorge, filled with 10,000 years of rock art, trails, and shrines. His presentation explores “aqua-sociology” or, “How Water Built Society in Pre-Columbian New Mexico." Fowles' book, An Archaeology of Doings: Secularism and the Study of Pueblo Religion (in press, SAR Press) brings together a decade’s worth of fieldwork designed to investigate the changing religious life of Pueblo communities in northern New Mexico from the eleventh century to the present. Fowles coordinates the archaeological concentration in anthropology at Barnard College and teaches a variety of introductory and upper-level courses including “Origins of Human Society,” “Pre-Columbian Histories of Native America,” “Archaeology of Idols,” and “Thing Theory.”   He directs a Columbia/Barnard summer field program, based out of Dixon, New Mexico. 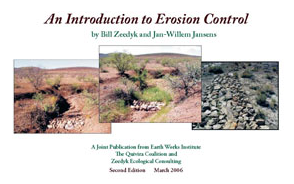 Jan-Willem Jansens is a landscape planner and owner/principal of Ecotone in Santa Fe, with a focus on conservation planning for landscapes in transition. Jan-Willem holds a Master of Agricultural Science degree from the Wageningen University in The Netherlands with a specialization in Landscape Architecture.  He was worked on international landscape planning and rural development projects in Kenya and Niger before arriving in New Mexico in 1993, where he served as Executive Director of EarthWorks for ten years. His current initiatives include a wetlands action plan for Santa Fe County, forest and watershed restoration, wildlife conservation planning, and trail design and maintenance projects in various locations throughout northern New Mexico.

Manuel Montoya, PhD is a professor and interdisciplinary scholar of global political economy at UNM's Anderson School of Management, where he has taught a broad array of coursework from global culture and the history of economic thought to international management. He is the CEO of his own global consulting firm, In Medias Res Consulting, providing support to global NGOs and INGOs including the United Nations and UNESCO.   He is a member of the Council on Foreign Relations,  a Rhodes Scholar, and a Truman Scholar.  A native of Mora, New Mexico, he has returned to UNM because of his interest in New Mexico as a global emerging economy.  His presentation explores “Finding Global Heritage in Indigenous Agricultural Land Usage.” 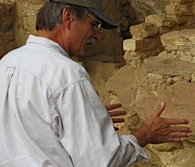 Kurt F. Anschuetz, Ph.D. has focused for two decades on the identification and evaluation of Ancestral and early Historic Period Puebloan agricultural systems and cultural landscapes in north-central and west-central New Mexico.  His Celebrando talk is entitled, “History to Live By: Puebloan Peoples Farming on the Edge.” Dr. Anschuetz is engaged in long-term projects documenting the history of occupation by Pueblo populations and their agricultural water management in the Tewa Basin north of Santa Fe, in the Acoma Culture Province west of Albuquerque, and at the Pueblo of Taos in the upper Rio Grande Valley for the time between A.D. 1200 and 1700. He is also providing technical assistance to the Pueblo of Acoma in its efforts to protect traditional cultural relationships with Mount Taylor, which is the community’s Mountain of the North, in advance of a renewed cycle of uranium exploration and mining. Additionally, Dr. Anschuetz is working in collaboration with the U.S. Forest Service, Rocky Mountain Research Station, in a study of the relationships that people from Native American, Hispanic, and Anglo-American communities maintain with the Jemez Mountains as part of a fire and fire fuels management study. In recent years, Dr. Anschuetz served as the Principal Investigator in cultural landscape studies of the Petroglyph National Monument, the Valles Caldera National Preserve, and El Rancho de las Golondrinas Living History Museum in Santa Fe. 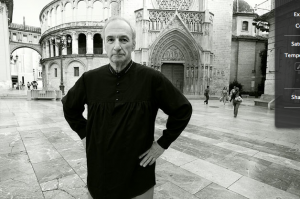 Thomas Glick, PhD, is a scholar of medieval Spain, science and technology; the history of modern science; and gastronomy at Boston University.  He wrote Islamic and Christian Spain in the Early Middle Ages (2nd ed., 2005); From Muslim Fortress to Christian Castle: Social and Cultural Change in Medieval Spain (1995); Irrigation and Hydraulic Technology: Medieval Spain and its Legacy (1996). Glick was awarded an honorary doctorate by the University of Valencia in 2010; has held Guggenheim, National Endowment for the Humanites, National Science Foundation, and Fulbright fellowships; and is a fellow of the Reial Academia de Bones Lltetres de Barcelona and the Linnean Society of London. 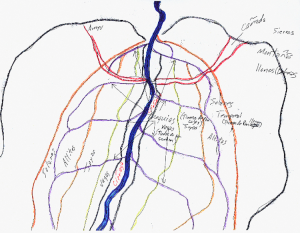 Juan Estevan Arellano is a farmer, writer, researcher, advocate, and acequia commissioner.  His most recent publication is Ancient Agriculture: Roots and Application of Sustaniable Farming (Santa Fe, 2006), a compilation and first English translation of the Obra de Agricultura by Gabriel Alonso de Herrera, the first book in the Spanish language about agriculture written in 1513. Arellano's picaresque novel, Inocencio: Ni pica ni escarda pero siempre se come el mejor elote (Mexico City, 1994) won the prestigious Premio Nacional de Literatura José Fuentes Mares.  He also was awarded the Premio del Río Grande from the Río Grande Institute in 1984 for his collection of poetry and photographs, Palabras de la vista, Retratos de la Pluma. Arellano has served as mayordomo of the Acequia Junta y Ciénaga and Concilio member of the New Mexico Acequia Association.  He is a scholar and advocate of traditional agriculture and acequias, involved in preserving the genetic diversity of the fruit trees and food traditions transmitted along the Camino Real from the Middle East, via the Iberian Peninsula and Mexico. He is a graduate of New Mexico State University, a Fellow of the Washington Journalism Center, and a 1998 Ford Foundation fellow.  His work has been supported by the Christensen Fund and recognized by the New Mexico State Legislature. ALI is grateful to Estevan for mentoring ten years of Dry Studio/Summer Field Station students and faculty.  Seminars under his magnificent apricot tree blossomed into a vision for the Celebrando. 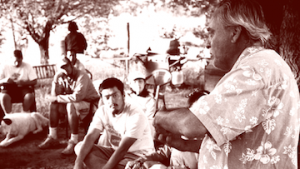