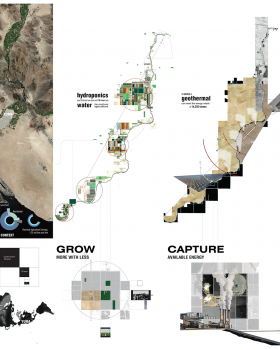 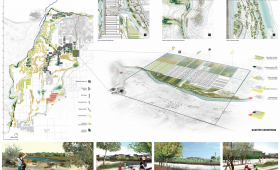 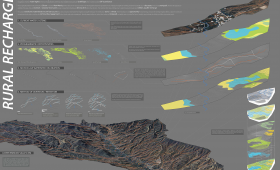 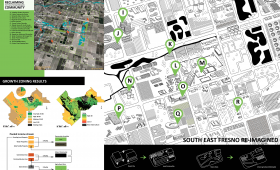 Reworking water means rethinking food. 85% of California’s water budget supports agriculture. Sustaining productivity to feed a growing population, and safeguarding economic viability for the agricultural sector, won’t just mean securing more water supplies, or reducing urban water demand; it will also mean thinking differently about farming. Proposals suggest strategies for urban farming irrigated with recycled greywater and wastewater; for salt-tolerant crops in the Mojave; for suburbs as a new sprawl of networked gardens; and for investment in a high-caliber diet---high in nutrients, profitable in returns, and low in embodied water and energy. Whether in networked sprawl, urban ag, or reinvesting in traditional water management techniques in Native-American and Hispano-American communities, these proposals suggest that a retooled hydraulic landscape carries more than mere liquid volume. An appropriate water infrastructure, designed to meet the caloric, nutritional, and cultural needs of particular biological and social metaoblisms, carries ‘fit’ between people and their physiology, landscape, and climate. Simply put, the proposals together make an argument comparable to that of the Slow Food movement. Slow Food leaders caused an international paradigm shift when they began to ask: Can locally-specific food production, from cultivation to marketplace, be reclaimed and fortified to resist the energy inputs, nutritional depletion, and cultural homogenization of industrial-scale food processing? Could food production respect and promote a vast, vibrant web of local histories, local traditions, local biological diversities, local climates, local characters? These proposals do not seek answers to the problem of water scarcity at the level of the problem—where will we get more water? That is the thinking that created the problem. These proposals find their expression at the intersection of memory and imagination—what are the values we can coax from the water at hand?