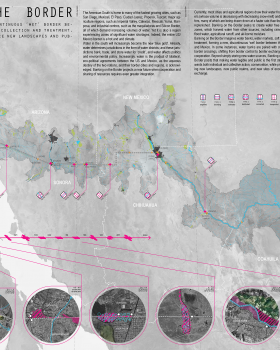 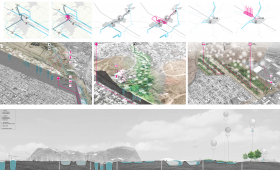 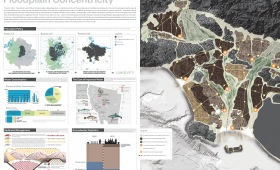 The William Turnbull Drylands Design Competition invited designers to respond creatively to the persuasive pleas of pioneering conservationist John Wesley Powell. In his 1878 Report on the Lands of the Arid Regions, Powell argued that a hydrographic redrawing of the West could serve as an intelligent basis for ordering settlement and managing scarce resources dynamically. The irregular—and by tidy Enlightenment standards, rather backward—geometry of watershed delineation could, he argued, serve as the basic unit for shaping a land-based democracy of informed, self-governing citizens, responsive to the particulars of local conditions. Merely draping the uniform grid of the land ordinances across a half-continent where water resources were so inequitably distributed would drain that grid of Jefferson’s radical and rationalist promise—the promise of an equal shot at a land-based prosperity for all.  We could redraw the geometry to accurately reflect the scarcity of productive land, and still deliver on the Jeffersonian promise. But if we kept the Jeffersonian geometry, we would have to artificially support large tracts of barren land with hydraulic engineering beyond the capabilities of local governance. The result: a federalized landscape rather than a localized one; concentrations of power rather than distribution of opportunity.

When Powell’s vision for a watershed democracy was rejected in favor of a century of hydraulic engineering, a geography mythologized for its rugged self-reliance, the critical historians of the west have powerfully argued, was engineered instead for dependence, placelessness, and a brittle vulnerability to change.

A new grammar of drylands design—variable, flexible, recombinant, responsive to local culture, values, habitat, and climate—is certainly a tool for ecological health. But better yet, as Powell provokes us to consider, redrawing boundaries is a tool for ideological health. Only a society—or a constellation of multiple cultures—of competent citizen-stewards collaborating, adapting, and self-managing is worthy of the myth of the West as true testing ground of the American experiment.

Powell’s argument that we might shed the neat emerald-green grid of the lily-white East to settle the West on its own terms echoes prophetically across economic, ecological, and cultural debates today. It is time, Powell might argue and these proposals variously suggest, that the West get comfortable living in its dusty-brown skin.